Spend any time contemplating your diet, and you’re soon to come face-to-face with the complicated relationship you have with carbohydrates. For success in dieting, what are the essential carbohydrate facts to know?

And can they make a difference in carving out a healthier lifestyle?

The experts answer with an unequivocal yes. But the devil is in the details, depending on what your health and dietary challenges are.

No matter what you hear or read, though, never lose sight of this basic fact:

Carbs are necessary to live.

You can’t eliminate them entirely.

But you can’t eat unlimited amounts.

Aim for moderation. Everything will be fine. Ready to learn the seven carbohydrate facts you need to know? 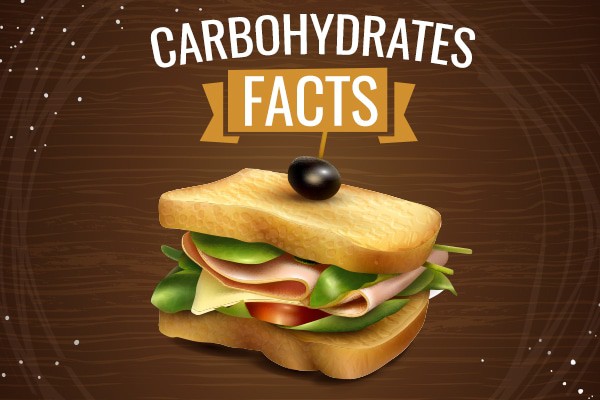 We start with the most basic of carbohydrate facts:

What are they and why are they important?

When you run out of gas, your car won’t run. When you skimp on carbs, your body won’t either.

How The Body Utilizes Carbohydrates

Carbs provide the body with energy

Most carbs get turned into glucose to provide that energy

Carbs fall into a category that nutritionists call macronutrients (1). Along with proteins and fats, these are the three primary sources of calories in a healthy diet.

And make no mistake about it:

Macronutrients can only come from your diet. Your body doesn’t make them on its own.

Carbs provide fuel not only for your muscles but also for your central nervous system. That’s why you might feel both sluggish and foggy if you haven’t eaten in a while. You might even put yourself in a bad mood if you run low on carbs.

Your body produces enzymes that break carbohydrates down into simple sugars that are subsequently absorbed by the body. As we’ll discuss later, some are absorbed faster than others — hence, the idea of good carbs versus bad carbs.

2. Not All Carbs Are Created Equal

Of the carbohydrate facts to know, this one is rather important:

Carbs do not all look alike.

Carbs come to us either as starches, sugars, or fiber.

The 3 Types of Carbohydrates

Let’s break down those categories a little more so that when you’re counting carbs, you know what to be on the lookout for.

But, be careful about thinking that french fries are a good source of carbs.

More on that later…

Sugars offer the second major category of carbohydrates. And like the other groups, all sugars are not created equal.

You’ll find sugars occurring naturally in some foods, such as fruits and vegetables. But you’ll also find plenty of added sugar that drives up your carb count. A lot of the added sugar is found in processed foods, such as those picked up from boxed and canned goods on grocery store shelves.

Fiber is the last category of food that gives us carbs. You’ll find plenty of fiber in apples, pears, beets, and carrots, as well as beans.

So while some sugar-laden foods can be good sources of carbs, you can easily go wrong. Same goes for foods made with carb-rich ingredients, like french fries.

The issue with fries is the oil used to fry them, and the added salt. Sure, you’ll get your carbs but you’ll also take in a lot more than you bargained for had you simply opted for a baked potato.

3. The Good and Bad in Carbohydrates

You won’t get far on your journey to learn carbohydrate facts before coming across the concept of good versus bad carbs (2).

Dieticians aren’t commenting on the behavior levels of these carbs. They are just making a statement that some provide healthier benefits than others.

What Makes a Good Carbohydrate

Why Are They Good?

Items such as soda, sugary fruit juices, white bread, cookies, and french fries are bad sources (3) of carbs. These foods have fewer crucial nutrients and can also trigger an unhealthy rise in blood sugar.

What Makes a Bad Carbohydrate

Why Are They Bad?

You may also find carbs referred to as simple carbohydrates and complex carbohydrates. These are mostly synonyms (4) for good–simple–and bad–complex–carbs.

Simple carbs are easily digested and provide a quick source of sugar while complex carbs take longer given their nutrient profiles.

4. Why Carbohydrates Can Be Dangerous for Some People

Knowing the difference between good and bad carbs can be a matter of life-or-death for one specific group of people:

Learning to live with diabetes means you must be an expert in remembering your carbohydrate facts. What you eat is going to drastically impact how you feel.

The reason for that is diabetes, at its core, is a condition that interferes with the body’s ability to break down carbs into sugars (5) and get them to the right places. As a result, you end up with higher blood sugar than is healthy.

Diet is an important way of coping with diabetes. Anyone with the disease needs to know about the concept of the glycemic index.

According to the American Diabetes Association (6), the glycemic index provides an estimate of how much a food’s carb content will impact your blood glucose levels. Foods with high glycemic indices raise blood sugar more than foods that have a medium or low glycemic index.

Examples that are low on the glycemic index scale include sweet potatoes, pasta, and oatmeal.

Foods higher on the index include pretzels, melons, and white bread. And items containing whole wheat or brown or wild rice fall in the middle of the scale.

Given the carbohydrate facts we already know, the obvious question becomes:

What’s the right number of carbs to eat?

Like a lot of things in life: It depends.

Don’t think about it in terms of right and wrong, though.

A rule of thumb is that each individual carb is the equivalent of about four calories (7), according to the U.S. Department of Agriculture (USDA). Generally speaking, the Agriculture Department says that healthy diets will supply about 45 to 65 percent of calories from the carb group.

There are also minimums.

The USDA says most adults should no fewer than 130 grams per day. If you’re a pregnant woman, the agency recommends a minimum of 175 grams (8).

If you are trying to lose weight, it pays to know your carbohydrate facts.

The more you know, the more you’ll be able to decide on a plan for taking off the pounds. And many popular diets focus on helping you curb the carbs.

These plans are predicated on the notion that you need to lower your calorie intake to lose weight, and doing so requires going easy on carbohydrates.

No single diet plan is right for everyone, so make sure to check with your doctor before diving into one.

Also, keep in mind that scientific evidence differs significantly on how significant a role carbs play in making you gain and hold on to excess pounds. Some studies have reached different conclusions (10), however.

With that in mind, here are some of the most common low-carb diet (11) plans to help you round out your knowledge of carbohydrate facts.

Popularly known as the keto diet (12), this plan puts a strict limit on carbs, capping them at 50 grams or less per day.

The theory is that keeping them to a minimum means the body will focus on the more critical task of burning fat (rather than sugars) for energy.

The strict limitations on carbs, however, aren’t wise for athletic activity. Carbs are the fuel you need to perform your best. Some experts say you might find yourself feeling a little fatigued and foggy if you eat too few.

Dr. Robert Atkins first introduced the diet that carries his name back in 1972.

The Atkins plan (13) also suggests lowering carbs, but in a more gradual way than the Keto diet.

Products containing the Atkins seal of approval are now found commonly in various grocery stores, making following the plan much easier than a do-it-yourself approach.

The Atkins diet is also different in that it can allow for reintroducing carbs into your diet over time in a controlled way.

One version of the plan has you starting with 20 net grams of carbs a week. Another version keeps you at a steady pace of 100 grams. Find a plan that works for you.

Developed by a professor at Colorado State University, the Paleo diet rests on an interesting premise. The diet argues that our ancient ancestors had it right when they were living off the land.

Under the premise of paleo, adherents eat only fruit, vegetables, eggs, nuts, seeds, and beef from grass-fed cows. They skip the high sugars and heavily processed foods.

The diet is called Paleo after the Paleolithic Era. The evidence suggests that those who lived back then got about 35 percent of their calories from carbs.

Some studies (14) show that the Paleo diet can lower blood sugar. Other nutritionists aren’t quite sure if a Paleo approach is realistic and sustainable.

Other low-carb diets worth understanding

Many other diet plans rest on the notion that fewer carbs mean fewer pounds.

A few others to explore: South Beach (15), often considered a modified low-carb plan — no counting carbs here; Whole30 (16) (based on the idea that by cutting out most sugars, you will eventually stop craving them); and Mediterranean (17), which was built on the notion that we have something to learn from those who lived a long time ago in the Mediterranean region.

7. Foods with the Most Carbohydrates

What good are carbohydrate facts unless you’re prepared to take action? With all this talk about their importance in weight loss, it would be helpful to know which foods are laden with the most carbs.

The answer might surprise you. If anything, it will remind you that not all carbs can be viewed in the same way.

This delicious tropical fruit contains 50 grams of carbs, according to Eat This, Not That! Magazine (18). But Mango is also jam-packed with vitamin C. So don’t be too quick to cross it off your list based on carbs alone.

On the flip side, we have the french fry.

Sorry to report, but french fries have about twice as many carbs as a bowl of pasta (63 grams per serving.) And, as Eat This, Not That! Magazine points out, there are plenty of other reasons (19) to steer clear of the fries. Make this one a once-in-a-while treat.

A few others highlighted by Eat This are as follows: cranberry sauce, at 56 grams per half cup; dates, at 74 grams for a single serving (four dates); apples, at 36 grams for a large piece of the fruit; and quinoa, at 39 grams per cup.

The one that hurts the most:

Summing up Our Carbohydrate Facts

With these carbohydrate facts in your back pocket, you’ll be better off at taking care of yourself–and your carb cravings

Well, maybe not that, but you’ll at least be able to make the right decisions about your diet and live a healthier lifestyle.

Don’t view all carbs as good or bad.

Make smart choices and eat everything in moderation and it will all be okay.

* YourShapeYourLife.com is a participant in the Amazon Services LLC Associates Program, an affiliate advertising program designed to provide a means for sites to earn advertising fees by advertising and linking to Amazon.com.

YourShapeYourLife.com is a participant in the Amazon Services LLC Associates Program, an affiliate advertising program designed to provide a means for sites to earn advertising fees by advertising and linking to Amazon.com.